Yes, well along with everything else worthwhile: cricket, all dressed in white on the village green, bucolic!; afternoon tea with cucumber sandwiches (no crusts) and scones with raspberry jam and whipped cream; a proper breakfast with cholesterol-busting bacon, eggs beans, hash browns, fried bread; the weather with information on the best places to experience it published in magazines; messin’about in boats; beer warm and flat, not this continental joke of lager; gin and tonic which kept Elizabeth the Queen Mum alive well into her 100’s; my goodness I could go on forever , the list is endless. But I’ve just had the most terrible shock! I wanted to write about my glorious golden yellow rose and I find that it was bred ….in Germany! So after this dramatic wakeup call I decided to research the origins of my other roses. You won’t believe this! I nearly didn’t ….and they’re mine, in my garden, loved under the illusion that they are all English roses! Loved and pampered under false pretences! One is German, two are French, one is Spanish and only two are English roses! We could’ve stayed in the European Union! And I am always so careful, trying to re-create my little bit of home in my backyard! I drive the poor bulb man from Rome crazy insisting on only English bluebells, I order Spring daffodils from England, and clematis England’s second favourite flower? That too. 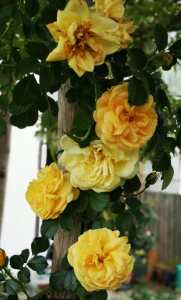 You never,ever know enough do you? Because the information is all there at a tap on your phone. MAIGOLD (Kordes 1953) The Kordes family is based in Schleswig-Holstein (I thought that the Grimm brothers invented this name for a fairy tale!) and is an innovative breeder responsible for early flowering roses. 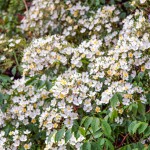 FELIPE KIFTSGATE (Murrel 1964) This one was developed by Hilda Murrel, a rose grower and campaigner against nuclear energy. Her rose was popularised by being grown in Vita Sackville-West’s famous Sissinghurst gardens. 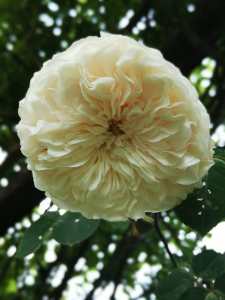 SOMBREUIL (Robert 1850) but unfortunately I can find nothing about him though he sounds French.

GHISLAINE DE FELIGONDE ( Eugene Turbat 1916 )Another mysterious Frenchman, but Ghislaine was a nurse in the great war who married a wounded soldier the Count of Feligonde. 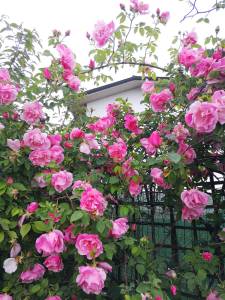 MME:GREGOIRE STAECHELIN (Dot 1927) a breeder who put Spanish rose growers on the map famous for his shrub variety.He has been likened to Gaudi as a kind of expressionist because he “consistently chose roses with a wilder and more extreme character than their parents.” 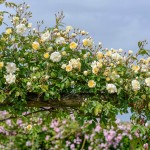 MALVERN HILLS (Austin 2000) breeder of English style roses and one of the fathers of the modern English rose.

I have been living in Italy for a long time and I'm grateful for all the opportunities this beautiful, varied country has offered, especially art and music....oh! and food too. I also work here, doing the most exciting job possible (for a people-person like me) I teach English. New people, new ideas ,new methods to investigate,what more could anyone ask for! View all posts by englishthatgrows

This site uses Akismet to reduce spam. Learn how your comment data is processed.